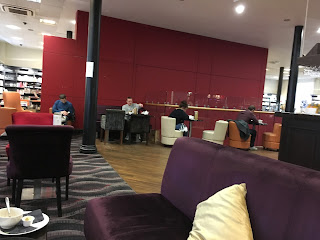 Review of Chapter One, Manchester


I visited this remarkable bookshop / café in one of the dark days after Christmas, just about in the New Year.  Normally on such a day I would not venture out unless I had to. It was below four degrees Celsius. However, I was on my way to a meeting that was cancelled at the last minute and I was kind of in the area.

It is a remarkable space. The floor seems only half finished but that somehow adds to its charm.  There is a big water feature ad its gentle tinkling keeps the atmosphere calm. The staff were friendly and actually made me feel rather like royalty.  I ordered my Americano and a waiter brought it to my seat later.  I chose to sit in a high-backed chair near one of the windows. There was plenty of choice in seating, including some fascinating booths furnished with small tables and typewriters. The cake looked fabulous but as I knew that there was Christmas cake waiting at home I refrained this time. Another time I won’t hold back.
Even on a quiet day like today there were clearly half a dozen or so people networking / holding meetings. Two groups had found very private spaces. Another young man worked away on his Apple Mac. There is easy access here with a good signal to the Manchester free Wi-Fi. I hooked up my phone with no problems. I sat and wrote in my note book.

This place wins as a bookstore, too. It sells an unusual mix of books and they are beautifully presented.  It’s the type of store I’d go to in order to buy a special present.
Well worth a visit.
Posted by Gill James at 00:34 No comments: