Ambient noise and creativity – does journal article explain why the Creative Café works?

Five experiments conducted by Ravi Mehta, Rui (Juliet) Zhu and Amar Cheema and described in the Journal of Consumer Research show that a moderate level of noise “is likely to induce processing disfluency or processing difficulty, which activates abstract cognition and consequently enhances creative performance.”  Put simpler and in our context : as we are distracted from completely logical thought because of the noise we experience in a café, we make way for something else to happen. That something else is more creative.
The article also tells us that all sorts of noise are actually disruptive to logical thought  – for example white noise (artificially created and containing all the range of sounds that the human hearing system can process) and pink noise that sounds like the general hiss of an untuned television. High levels of noise also disrupt. The latter is not to be confused with loud noise; loudness is a subjective perception. However, as the café user / creative practitioner is distracted by a moderate level of noise, including some white noise, room for abstract thought is created.
The participants’ creativity was measured by how many unique ideas they generated (experiments 1, 2 and 3) when exposed to moderate levels of noise. In experiment 4 they were asked to come up with as many solutions as they could to a particular problem. In the final experiment, participants’ responses were monitored as they sat in a common room at various times of the day.
The study shows that a moderate level of background noise enhances creativity and a high level disrupts it. Possibly, lower noise level allows more logical thinking to carry on so does not allow for the more creative, more abstract thought. The article also mentions a café as being a natural place for this moderate level of noise.
Tis article offers us some explanation as to why a café is a suitable place for a creative practitioner to work and gives us permission to indulge. I certainly know many writers who like to sit in a café – they claim it makes them feel less lonely than working in isolation at home.  The article, however, seems to point to an additional reason, one of which the practitioners are not aware: that they actually think more creatively there. I often plan in a café and I’m often overtaken by those eureka-inducing ideas that seem to come from nowhere as I sip my cappuccino and tuck into my passion cake. Is the cake and caffeine also important? Many of my writer friends think so. Is that a whole other piece of research?
One thing is certain: café noise does not disrupt the creative train of thought.  A whispered conversation in a library or an open-plan office can as you can understand the words and you can’t help but listen in. The pneumatic drill outside or the clatter of plates falling and breaking is just uncomfortable. All of this is a matter of common sense. It is the change of the way of thinking in the moderate noise zone that intrigues in this article – and this may just explain why creative practitioners like cafes so much.
Posted by Gill James at 01:39 No comments:

Hoxton, anyway, is a delight. Bohemian, multicultural and good old London town all at once. Not to forget that is also the home of the Ministry of Stories and therefore the place where I tend to take lunch on a day when I’ve volunteered as a mentor.
It looks like a greasy spoon. And indeed, they do serve excellent breakfasts, though as they are so gourmet and they serve them all day they call them brunch. Even the sausages and slices of bacon are not at all greasy. There is a supplementary lunch time menu.
The people who run The Pig would probably be surprised to learn that the café should belong to the Creative Café Project.  In some ways it is the Creative Café at its best.  It is totally unselfconscious.  The free Wi-Fi helps. Creative practitioners, including me, sit and work there as they wait for food to arrive. I’ve observed artists meeting to discuss projects. I overheard an author talking to his agent one day. There is a rack of newspapers. Some sit there reading their Kindles.
You have to pay cash at The Ginger Pig. There is nothing fancy here. But it excels in other ways. The service is quick. The food is excellent. The whole establishment, including the toilets, is so clean it squeaks.
Read another review here. Better still, make a visit. You could even also volunteer for the Ministry of Stories whilst you’re in Hoxton.
Posted by Gill James at 00:54 No comments: 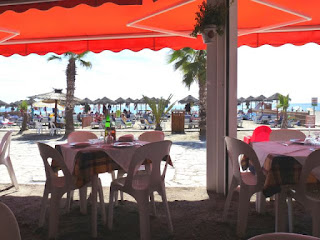 We’ve been coming to Nerja now for 24 years. When we called at the bar just now to use the Wi Fi we met someone who started coming here 25 years ago and now lives here.  He’s never met anyone who doesn’t like the place. I’ve met just one such person. We know lots of other people who keep on coming back.
But in all the years I’ve been here I haven’t really found what I would call a Creative Café? Is it that it’s too hot to look? There is one bar near the Burriana Beach that encourages book crossing and one or two bars display local art for sale. That’s about it.
Except, maybe not quite. There are those old men who used to sit in the shade of the lemon trees outside the market place, when it was a market place. They now put the world to rights a little further down the road outside a small local café, purchasing an occasional coffee.
You can actually count all of the sunbed areas on the beach as cafés. The managers act also as waiters and fetch drinks and snacks from the merenderos behind. The sunbeds’ occupants read a variety of literature some far more literary and intellectual than one would imagine.  Not to mention the conversations that go on amongst friends and between strangers. And there’s the odd strolling busker that these days are much better than they used to be 20 years ago.  Yes, it’s all about sand, sea and sun. Yet it’s actually about more than just sun-bathing.
There’s culture aplenty, anyway. Concerts in the caves. Exhibitions. Stage plays. Decent cinema. Much history. But not necessarily inside a café.
I wouldn’t be a writer if I hadn’t come to Nerja 24 years ago. I’ve published a short story set here, written by someone else. I know of another children’s writer who spends each winter here. And yet another enthuses about it too. So, the creative practitioners abound. Maybe because of the microclimate here – cooler in summer and warmer in winter - they don’t need to hide within a café to connect with others in the way that the Creative Café permits. Or could it just be that Nerja is one big Creative Café?
Posted by Gill James at 05:46 1 comment: